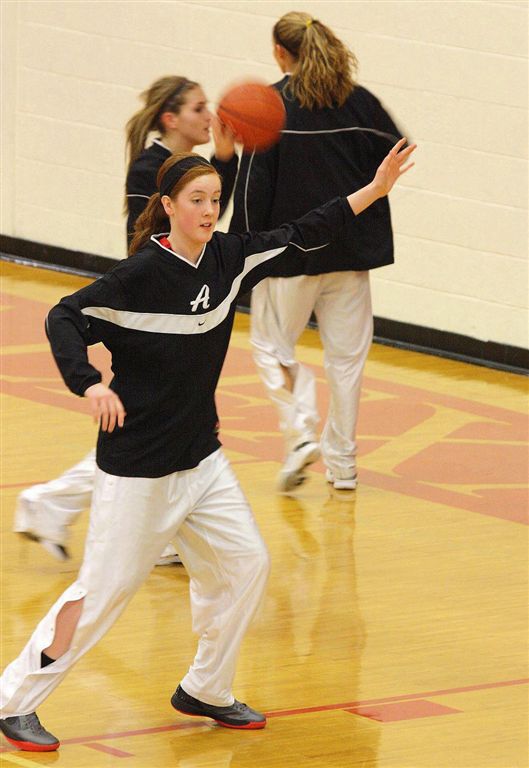 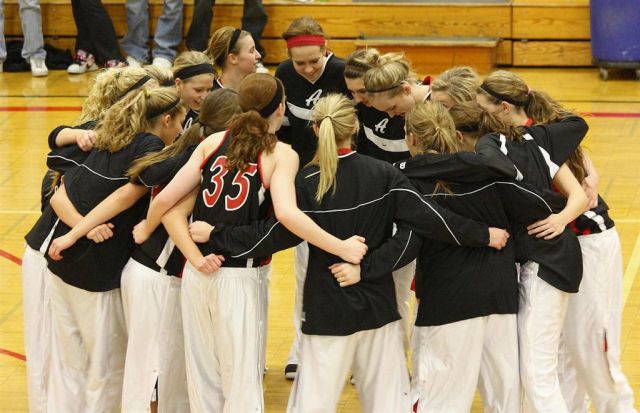 [Cara Wood, on crutches, in the huddle center.] 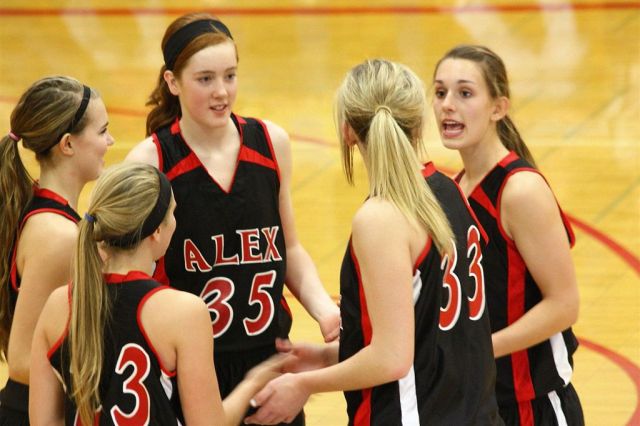 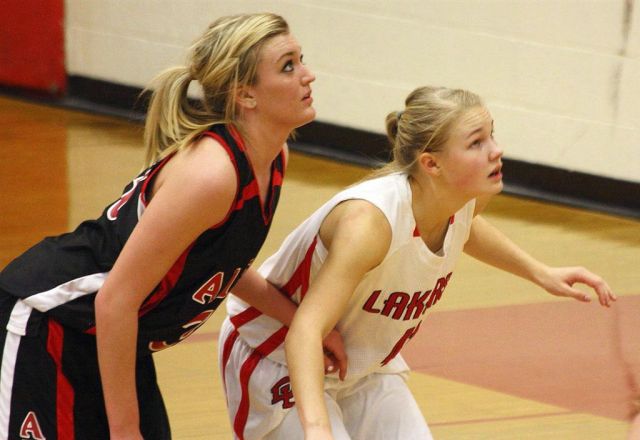 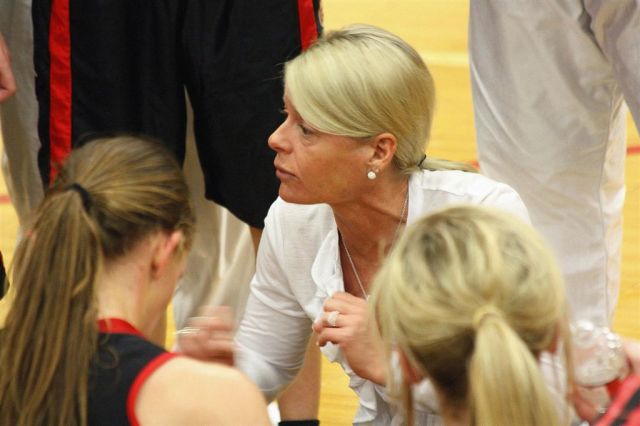 [Wendy Kohler, trending toward 500 career victories as the Cardinals’ coach.]

At this point, we introduce our stringer in the nation’s capital.  Betsy Greer is a great sports fan.  We lived about a mile from her in Arlington – meaning we were all just across the Potomac River from Georgetown and George Washington Universities.  Here’s Betsy’s latest report on women’s basketball:

Women’s college ball in the DC area will be interesting — Maryland is top-ranked and has a great team.  Georgetown, which has floundered for years, finally has a competitive team, but has to rely heavily on the performance of its star player; when she’s on, the team is very competitive.  And George Washington, which was good under Joe McKeon (sp?) who went to Northwestern, finally has a competitive team this year, and should be fun to watch.  I saw Maryland whip Georgetown last month, and I plan to go to the George Washington/Georgetown game on December 11.  It should be a good one.  Like your write-up of your Cardinals.  At the end of December, I shall go to Harrisburg, Pa., to see my granddaughter play for her high school team.  I haven’t been able to get up for any games during her sophomore or junior years, so it will be fun to see how this gangly kid does as a senior. ~ Betsy 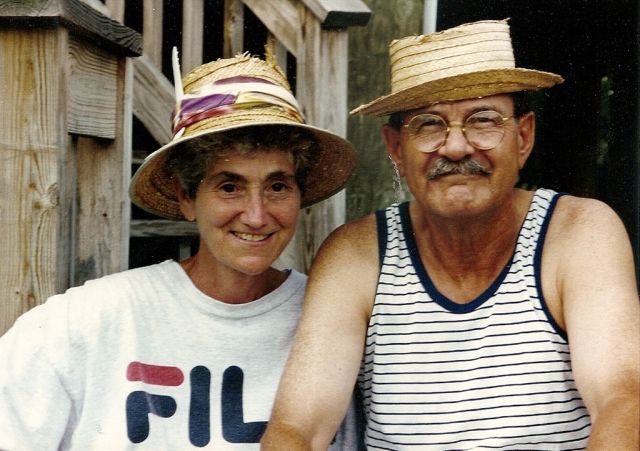 [This is Betsy with her husband, Dick.  I hope she doesn’t mind – always thought this a great photo of both of them.  Dick was a Johnny – but I believe he preceded Gagliardi  (though not by much).  For the more mature of you, you may remember Dick as a teacher in Alex in the 50’s?  The Greer family moved to D.C. from here – and the Oberts reunited with them when our family moved there in ’66.]

Finally, our hockey girls should now know they are a very good team.  Last night they beat North Wright County, 1-0.  This was a very big win (and 3rd in a row) as noted from my hockey stringer who e-mails in road game results in the wee hours of the evening:

Marnee’:  We were out shot I think 22-12.  We scored with 20 sec. left on a shot from Shanee’ at the point and Melissa Drown putting in the rebound!  Steph played great in net.  Chris Drown (Dad) had tears he was so proud of his girls.  North Wright County went to state last year for sec 8 AA.  I believe they’re ranked either 5 or 7th in the state for AA.  The girls played very hard!  River Lakes beat Bemidji in OT.

Blog: Give ’em all big hugs from the Super Fans!

Marnee’:  Oh I think we took care of that last night! 🙂  It was like they won the state championship!  Everyone played their hearts out.

[The blog admits to minor tweaking of stringer reports to prevent lawsuits.  😉  ]

[Niece Jessica shootin’ some hoop two days after her Christmas Day birthday in 1992.  Jessica, as an alum, is now an avid George Mason basketball fan!] 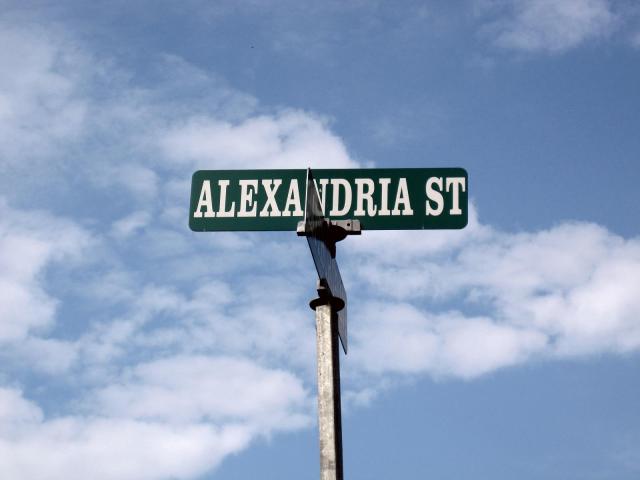 [The street on which the supervisor grew up in Terre Haute, Indiana.] 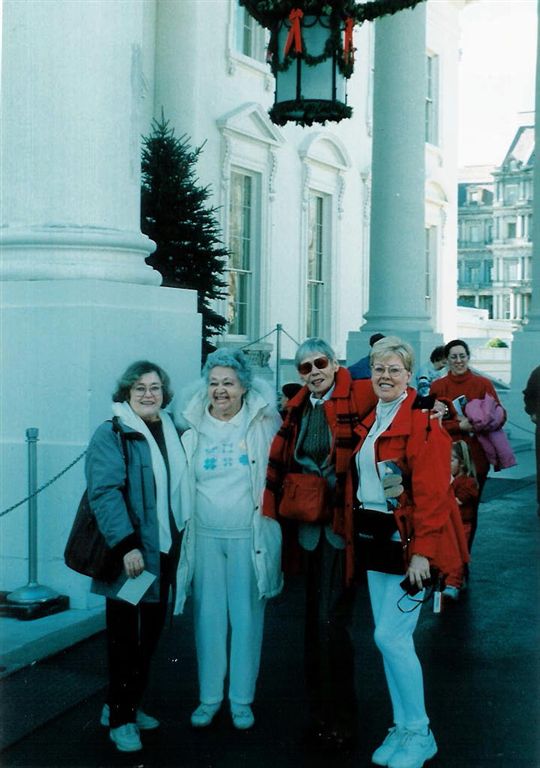 [All the biddies at the White House for Christmas, some time in the 90’s.]