Get Down, Get Funky!

OK, more about the scoreboard later.  In keeping with tradition, we will first attempt to have the storyline have something to do with the title.  That means, of course, Funky Gumbo Trio (though sometimes more).  Thursday night, the boys were playing again at Sixth Avenue Wine & Ale (SAWA).  We now know, after several years of following the group, that you have to be around for the final set – we’re quick on picking up on such things.  Accordingly, though we usually appear at a SAWA group’s 7:00 starting time, we rested up a bit first and arrived at 8:00 so we could be there at the finish.  (And I believe I told the story before, but as a short recap, the group was formed (though the players change with matriculation) when Bill Engebretson, the drummer, posted a notice on the University of Minnesota, Morris campus requesting musicians beyond the scope of the three chord rock ‘n roller – he was looking for musicians with some classical training who could be adept performing jazz and blues and stuff.)

Most groups take a break on the hour – but on this night, Funky Gumbo played straight through from 8:00 – 10:00 (way past our usual bedtime).  There was a good crowd when we first got there, but it thinned out as the evening progressed.  By 9:30, you only had the hard core fans left – and also the rare SAWA (or any such similar place) occurence where the remaining patrons were solely focused on the entertainment.  And the requests began.

The supervisor loves it when Mike Gill, on sax, channels B. B. King through Joe Cocker.  And Spencer Christensen, on guitar, gives us our Alex connection – Spencer started playing with the group last year as a senior in high school; now he is studying guitar at McNally Smith College of Music in the Cities, and loving it.  Unfortunately, the bass player was new to us and I didn’t get his name.  Here are the last four songs they played that night – including a requested encore of “Sweet Home Chicago” where the memory chip on my camera ran out of . . . memory about half way through the song.  Sorry ’bout that.

http://www.youtube.com/watch?v=DH6v1-oDdFM – “The Thrill is Gone”

http://www.youtube.com/watch?v=Kojz4aMIpFU – “Shake It Up and Go”

OK, now back to hockey.  We hosted Sartell-St. Stephen-Sauk Rapids-Rice last night.  They are a conference team – and a reminder our schedule includes mostly class AA teams because it’s hard to find enough class A teams to play against.  Sartell and Sauk Rapids high schools, individually, are as big as Alex, so we’re always at a disadvantage in the numbers game.  Not whining, just the facts.  The scoreboard reflects the final score of the JV game.  The two home JV games so far have ended in 0-0 ties.  Again, we had a big shots-on-goal advantage – a good sign.  I decided to spend a lot of camera time this night on the JVers -several players have been on that team most of their high school careers and we have enjoyed watching them play as well.

[The scoreboard on our arrival.  The red state championship banner in the background a reminder on how difficult that is to attain.]

[Bailey Serum, freshman goalie – would suspect she may get some varsity playing time this year.] 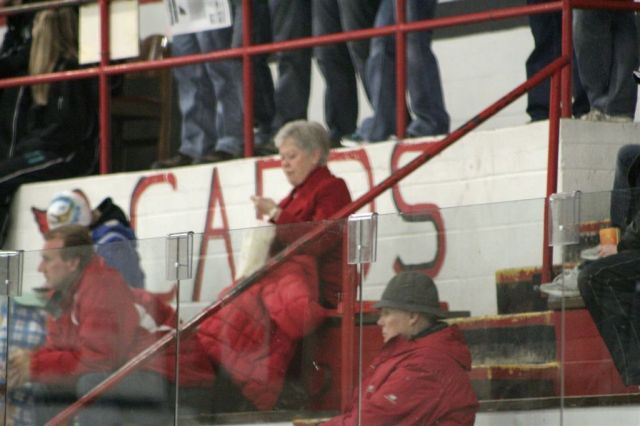 [The supervisor rushed up to preserve our seats on the red line.] 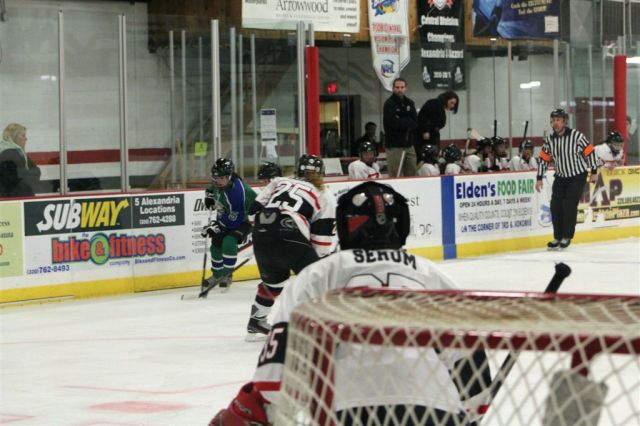 [Rachel Drew, sophomore center – will play for the varsity in the future.] 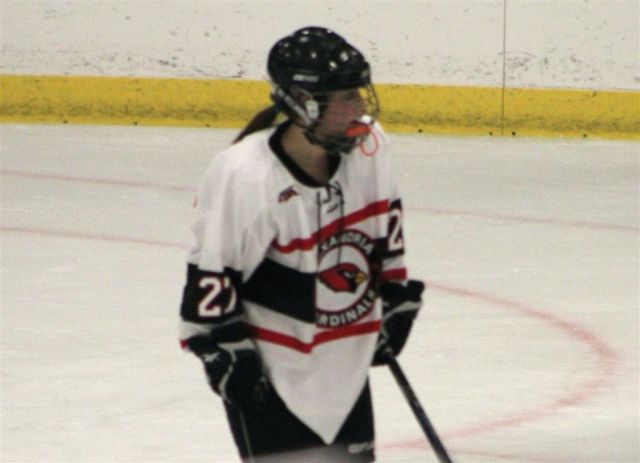 [Sara Schmidt (27), junior forward – though last night she played defense.  You can’t help but develop certain favorites – Sara fits that bill probably for the reasons given in the following photo.] 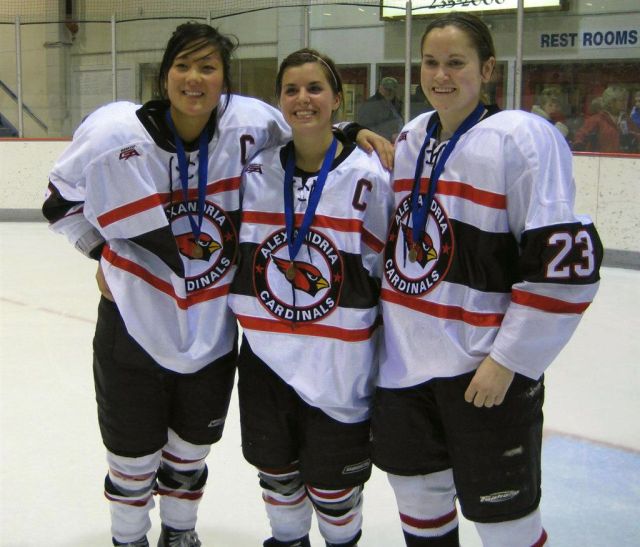 [Undoubtedly, one of the best lines in the history of the state.  Kat DelZopo, Abby Williams, and Michelle Anez led the Cards to the state championship in ’08.  We affectionately called them The Smurf Line.  (We proudly noted that Abby calls her current Bemidji State line, The Smurfs, as they are all under 5’4″.)  Sara Schmidt would qualify for The Smurf Line.] 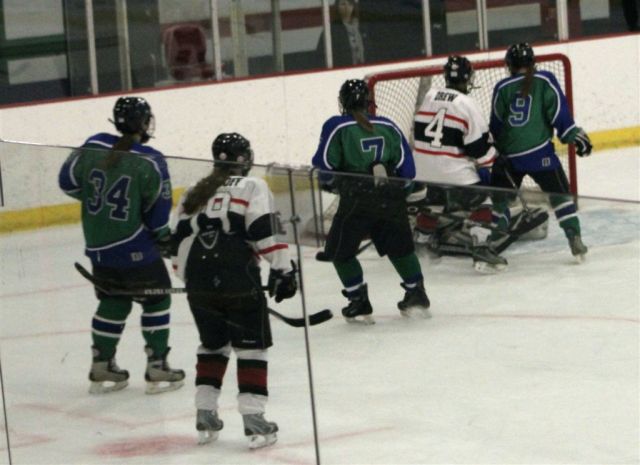 [Rachel in on goal.] 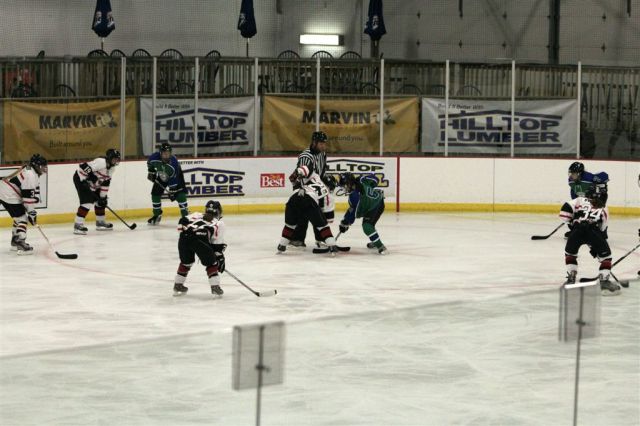 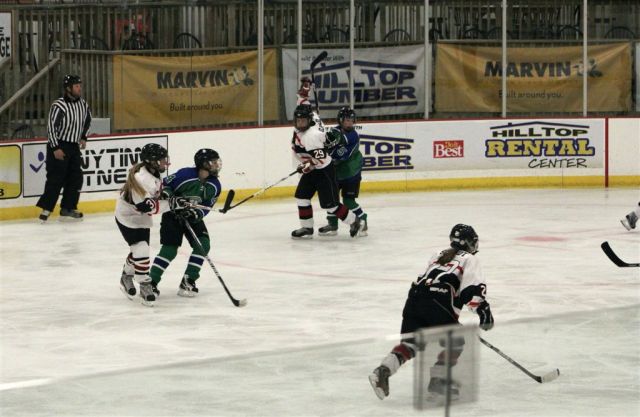 And now – the varsity.  I have no idea what the Stormin’ Sabres record was coming in – I get those lovely “error” messages when I try to go the hockey websites?  But we knew they have probably the best player in the conference in Kendra Rasmussen – and they have a transfer from St. Cloud Tech who is also very good.  Sure enough, the Sabres’ stars got them off and rolling early – a 3-0 lead after the first period.  It didn’t look good for our Cards.  Then a funny thing happened on the way to the 2nd period – the Cards played great, easily their best period of the year.  Shelby Iverson scored early to pull the Cards within 3-1 (Shelby has scored a goal in all three games so far) – then I believe it was Rasmussen who scored shortly thereafter made it 4-1.  The Cards dominated the rest of the period scoring two more goals, one by Rachael Finley and the other by Danielle Carlson.  Now down only 4-3 going into the final period, it looked like the Cards had the momentum.  But then it appeared that having played a road game just the night before took its toll – the Cards played a weary 3rd period and lost 6-3.  They can take some positives from this game – and they will need them as they now begin a mind-numbing 7 game road trip, against a lot of big schools.  Hang in there, ladies! 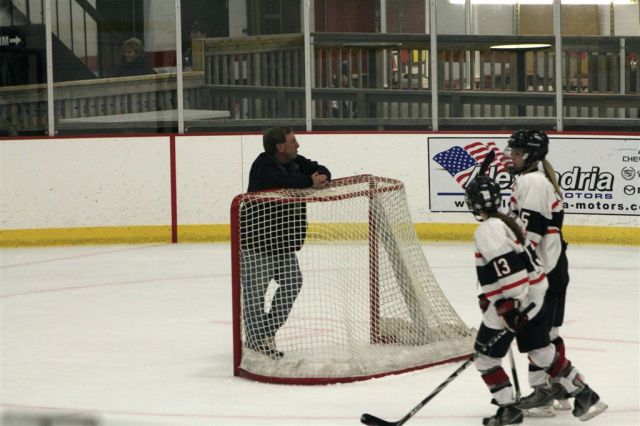 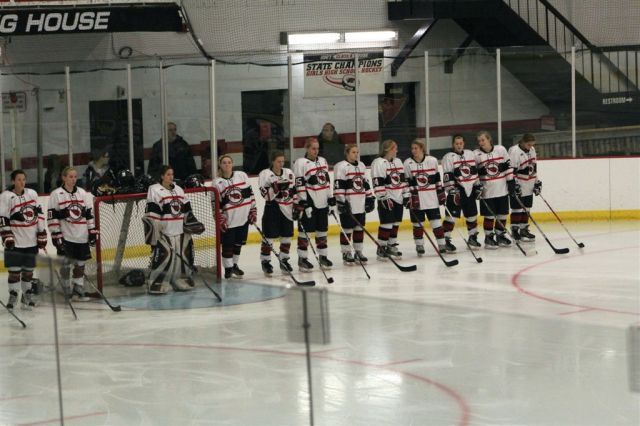 [Kendra Rasmussen (2) appears to have D-1 abilites – it’s fun to watch her play, except when it’s against your team!  There is an 8-minute video of her goals from last year – don’t need to watch it all to get a feel for her skills.  No. 12 is the transfer from Tech, also a very good player, whose name escapes me now (a mind is a terrible thing to waste).]

[Shelby – unfortunately, not all of the introductory photos turned out, stuff happens.] 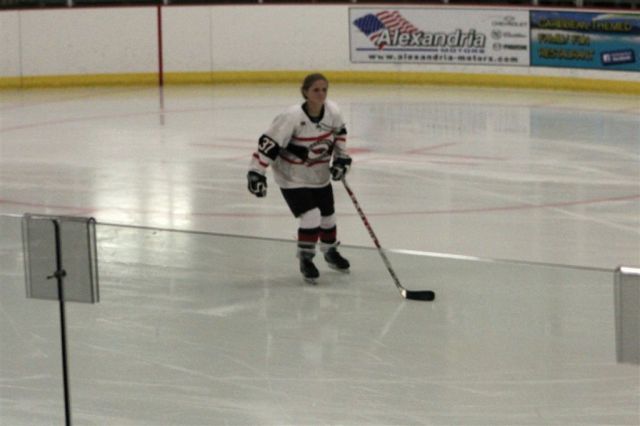 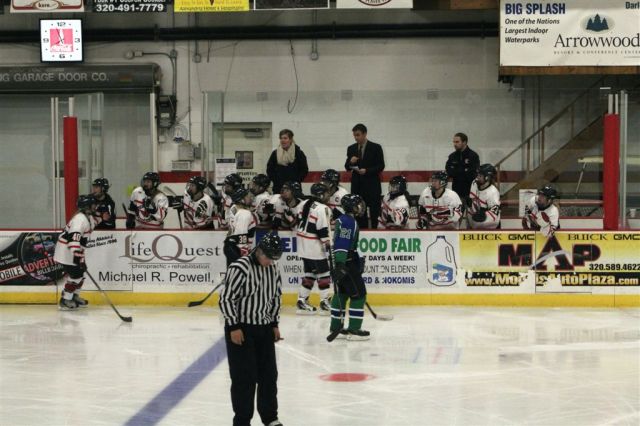 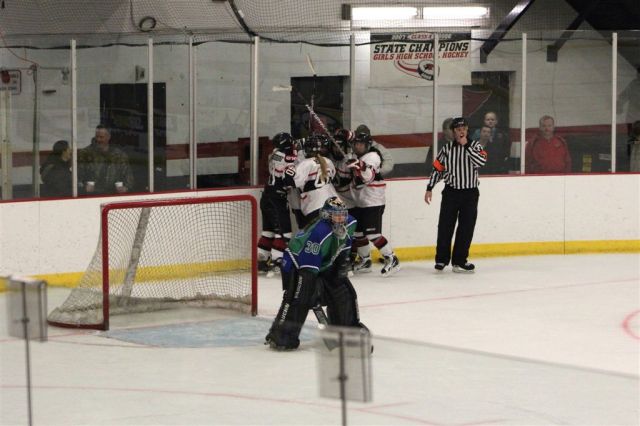 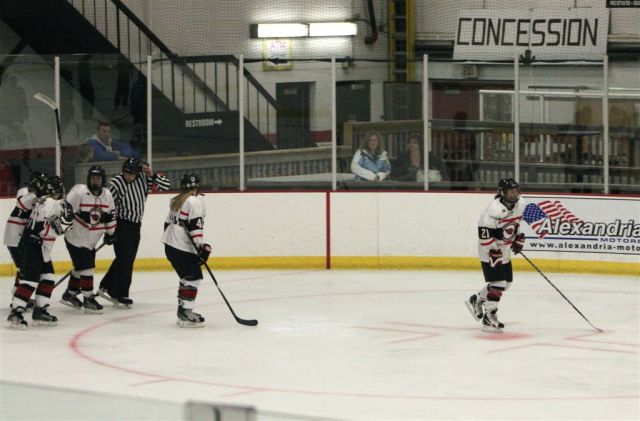 Get used to seeing Bethany and Megan Hasz a lot over the next four years.  Here they’re competing in the Nike Cross Nationals Heartland 5k championship in Sioux Falls (Echo Press photo):

Viking fans need something to celebrate:

And finally, as today’s column comes to end, we are enjoying our first accumulating snow fall of the season:

Just for fun:  Bob Annen lives in Australia.  He is the son of Super Fans Bob and Vivian Annen.  Bob, the son, is in the States for the first time in 6 years.  Bob, the dad, said today’s snow will be the first snow Bob, the son, has seen in 10 years.  🙂

And what the supervisor does on snowy days: 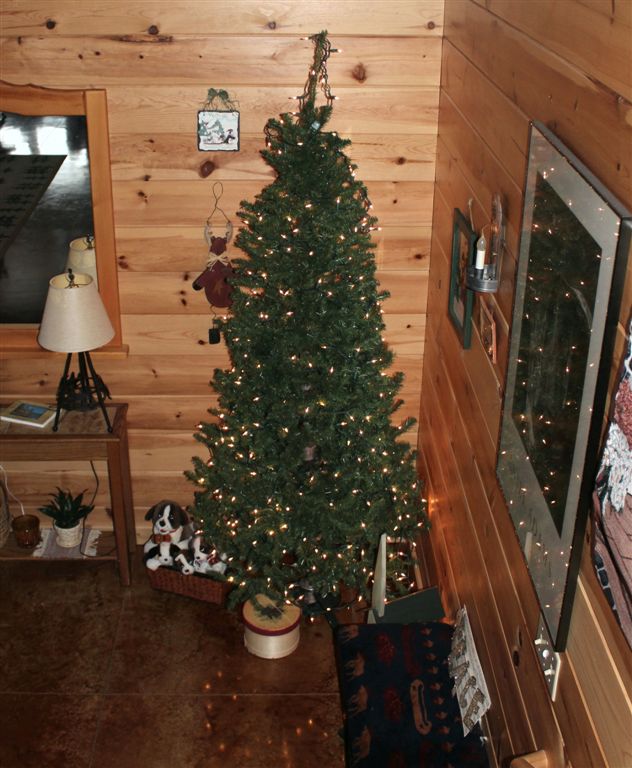 [For those of you who previously visited this column, the nature photos have been moved to the next article.  Something to do with volume.]

We do have some reviews:

Great Job!  As I said lots of positives from last night!!!   Here’s some more hockey scoop. Kendra’s Grandpa helped me do the score book last night.  We knew him from Kendra and Shanee’ playing together.  He developed a computer program for hockey scoring and wanted to see if we would be interested in it.  It worked great.  Anyhow I asked if Kendra has many D1 schools looking at her.  It didn’t sound that way.  I know last year Providence was but they no longer are interested.  He said all the D3 schools want her but she is also getting attention from D2 schools for soccer.  ~ Marnee’ Herd (proud mom of Shanee’)

Thank you SOOOO much! Much better quality than the ones I have. ~ Jo Colvin (proud mom of Spencer Christensen)

Beautiful that is Minnesota at it’s coolest, enjoyed.  ~ Jo Lee (proud neighbor of the cub reporter)