The Second Week of June

Before we proceed any further, and because this is the alexandriacardinal gossip page, we must first give a shout-out to Jamie Piepenburg and Rosey Erickson for carrying the Cardinal track team to a 2nd-place finish in the state meet held this weekend at Hamline.  Jamie won the 3,200 and placed 2nd in the 1,600; Rosey won the long jump and finished 6th in both the 100 and 200m dashes.

[A delighted Jamie wins the 3,200; great photo stolen from the StarTribune.]

[Rosey from an earlier meet; photo borrowed from the Echo.] 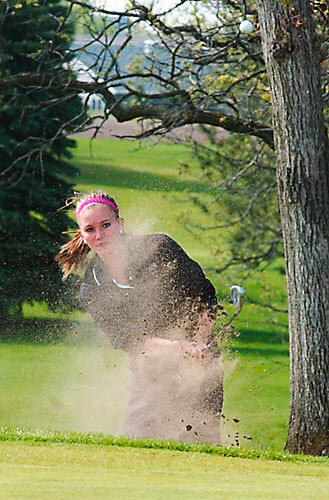 [Oh, and Maxine Carlson is going to state next week; photo on loan from the Echo.]

Many of you may recall that on June 7 the temperature in Alexandria reached 97 degrees.  The very next day, the boys of summer arrived on the 1st tee dressed thusly (a 40-degree temperature drop):

And the day after that, Sam Joy (as captured by Al Grundei) arrived at the course with snow shovel-in-tow: 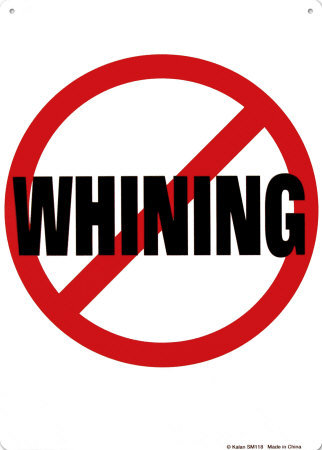 Friday, we went to the Cities for nephew Michael John’s graduation party.  We had good intentions of visiting the state track meet that morning (see above), but the weather forecast was foreboding.  A highlight of the trip down was a complete stop of traffic on I-94 a couple miles from Melrose – we inched our way to the exit, stopped at the Burger King for respite, and learned a cattle truck had overturned on the highway.  We took the side roads to Freeport and re-entered I-94 until . . . Monticello, where we got off on 25 for the cutover to 10.  25 to Big Lake was under total renovation – I guess finally making it a 4-lane road.  We inched along 25, got on 10, and eventually made it to Mounds View in a gut wrenching 3-hours.  (The road trip home that evening was, of course, in the rain.  As older people we do not like to drive at night; somehow driving home at night from the Cities is always exacerbated by precipitation!) 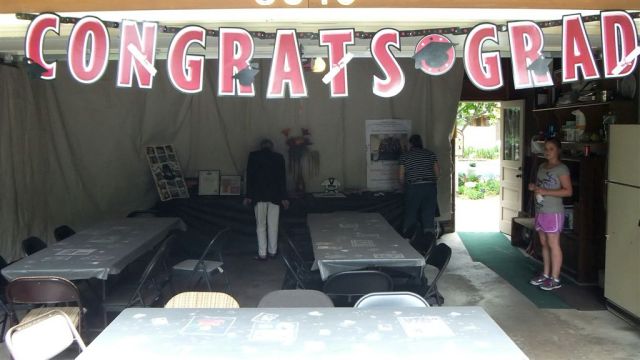 [Michael and his cello will be going to Drake next year.]

Then came the date that will live in infamy . . . or famy.  It was a PR – not ever to be broken.  The stars will never again be aligned such – nor would we ever again attempt such a death-defying behavior.  Five music venues in one day!  Beginning at 2:00 pm, with each lasting about two hours, until the bewitching hour.

Beginning at the winery with the Salty Dogs.

The video is Cannibals: http://www.youtube.com/user/ruthobert#p/a/u/4/865xAB7sxcA 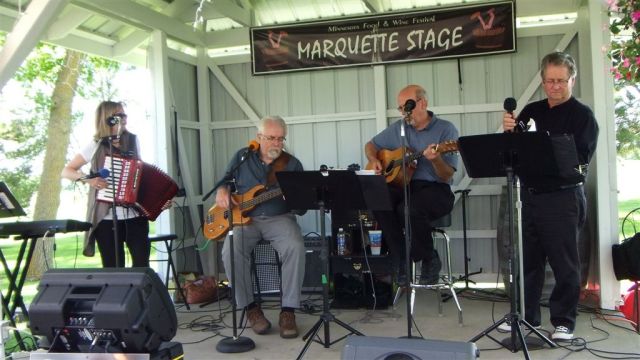 And then it was on to Spencer Christensen’s graduation bash.  The attendees are recognizable at least to themselves: 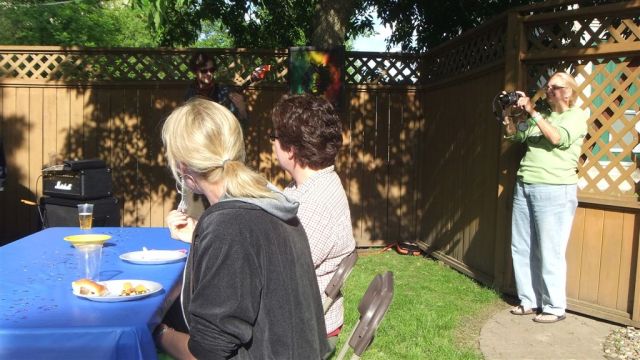 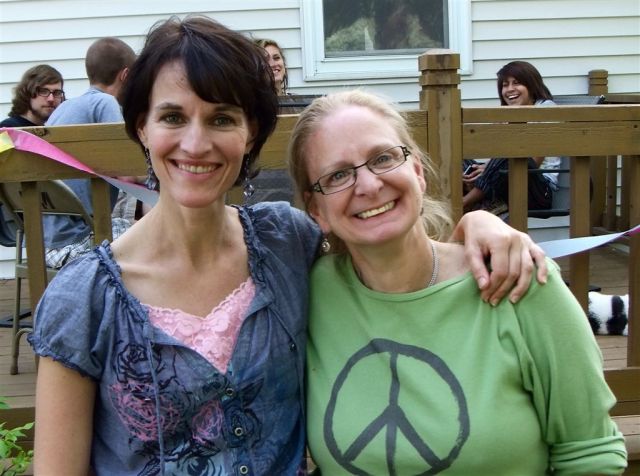 [Spencer and his guitar will be going on to McNally Smith College of Music next year.]

Then it was on to the airport – Chandler Field, specifically – for Greatest Generation Day (nee, Hangar Dance) with Doc’s All-Stars playing a benefit for the Douglas County Historical Society: 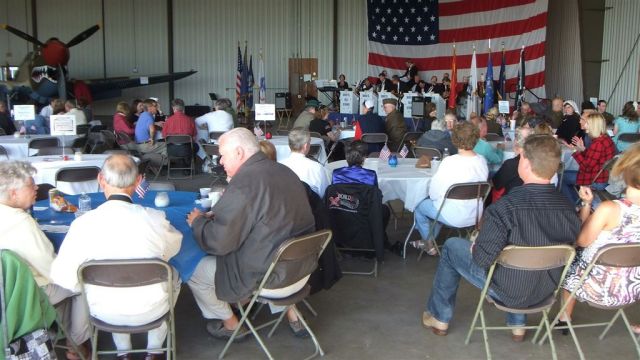 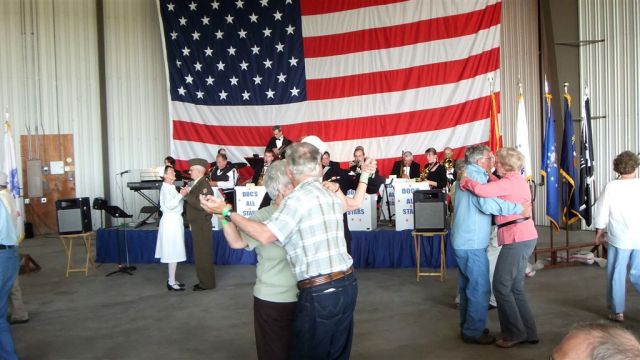 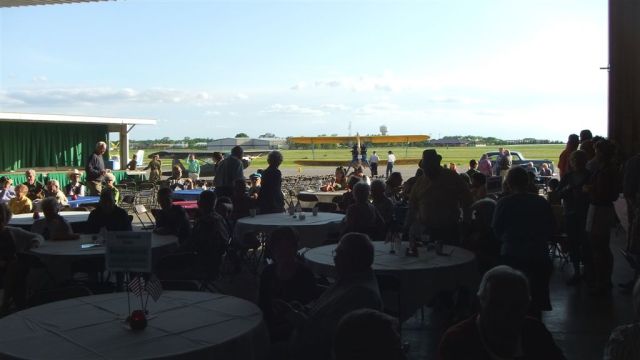 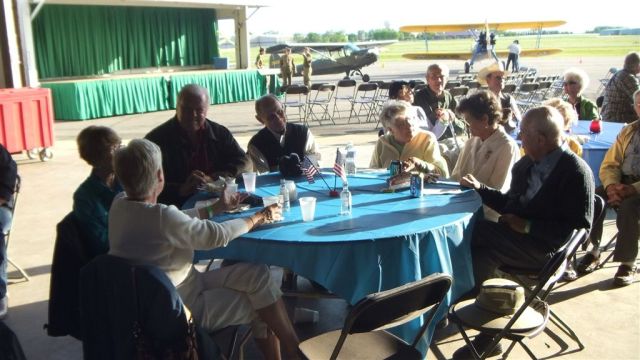 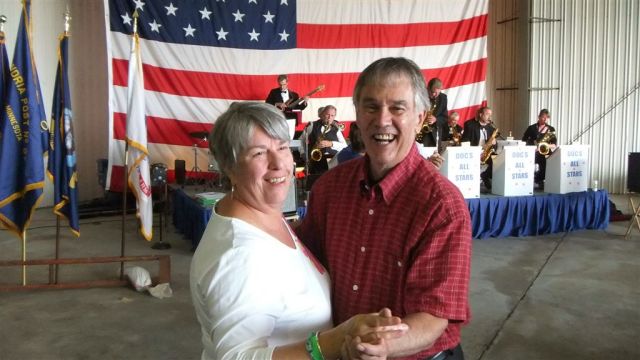 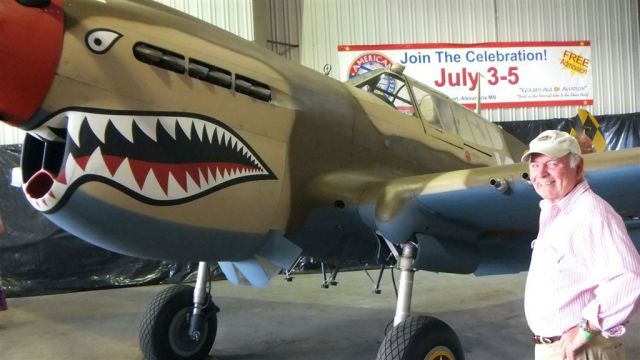 The All-Stars with a couple of tunes:

[To the best of my knowledge, the All-Stars are not taking their instruments off to college next year.]

Then it was off to Lisa Lynn at SAWA: 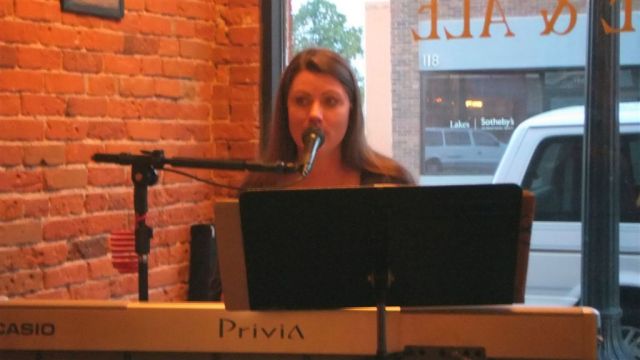 [Unfortunately, the camera ran out of memory before Lisa ran out of Vincent – apologies.]

I was ready to call it a night – or a bath tub, or a cheeseburger – I was kaput.  But the supervisor, who rested through round one in recovery from a sore throat, was on a roll.  Egged on by fellow SAWA customers, we all opted for the Eagles’ Club next where Funky Gumbo was performing.  We did – and the boys “tore the doors off the place.”  D***, camera!  That would have been some great videos to get!  But next time: