Something didn’t seem right when we saw the brackets. These were not familiar teams. The boys’ basketball team was scheduled to play at Maple Grove in the first round of section 8AAAA tournament play. Maple Grove is a Twin Cities suburb, 120 miles from Alex. This is a trip we would not have made except Alex was also playing in the boys hockey state tournament the following morning.

We left early knowing we were likely to get lost – because that is what we do. We left armed with written directions for our destination from both the Alex and the Maple Grove websites. But we knew that wouldn’t alleviate likely circumstances. We exited I-94 at Maple Grove, having just passed its sign that noted – population 50,000+. That gave us pause despite knowing it may not actually reflect the bizarre alignment of school districts in the Metro area. We looked for a place to dine, saw a Quiznos, and immediately tried to wend our way towards it through the jumble 10-minute stoplights one encounters in large suburban areas. When we finally got there, it was closed – an empty building with a “For Lease” sign on the window. We spotted a Culver’s on the far side of the main exit road and made for it – again through the spaghetti junction of multiple stoplights and “Do Not Enter” signs. Culver’s was open. After dining, we perused our directions and made for the school.

We were looking for 99th – the next street on our directions from both schools. We visited a good portion of Maple Grove, possibly may have dipped shortly into eastern South Dakota, and never found a 99th? The directions were not clear as to whether the school was on the north or south side of the interstate – we visited both sides several times. We queried a lady jogger who advised us to turn by the Rainbow – that proved fruitless. We finally stopped at a gas station. Armed with new information – we were directed to “93rd” – we finally discovered the school, still in plenty of time, or so we thought.

Once at the school, fans were directed to enter the facility at Door “D.” From the parking lot we entered at the school, we could see Doors G and H. Nevertheless, this seemed to be the place to be. We parked and ambled the 3 city blocks to the school, where we inquired of a patron the way to Door D. We were advised it was on the far side of the building. We asked if we could walk to it. He said, “Better drive.” We hiked back to the car and began “feeling” our way to the “far side.” We had to stop for gas along the way, but eventually made it. We concluded that every school in Alexandria could fit inside the Maple Grove High School.

Once inside the gym, now just minutes from game time, we encountered Brother Cam and Al Grundei, both north metro area denizens. We settled into our seats in a nearly empty gym – Maple Grove appeared to have about 30 student fans – as the game began. (And the gym was so dark (?) I didn’t even attempt photos.)

The teams appeared to be of equal size – that was only similarity. Before the game was 3 minutes old, Maple Grove had a 15 – 2 lead. Alex had been competitive athletically with every team we played all season, so we thought maybe the Cards just had to shake off the doldrums from the 2-hour bus ride to get there. The tempo of the game never changed. We could not guard them. They either got fast break buckets, or every player on their team would drive by their Card defender for lay-ups – but if they had an open 3, they took and made them, too. It was 55 – 25 at the half.

To the Cards credit, they played better offensively in the 2nd half, but we still could not defend the quicker and faster Maple Grove team. The final score was 90 – 63, with the last several minutes of the game played in running time.

We checked the brackets again – it also included Moorhead (meaning the section covered at least 220 vertical miles of western Minnesota), and other big schools we don’t usually encounter at tournament time. This year we had been placed in the largest schools section. We all independently checked school sizes when we got “home,” and here is Professor Grundei’s report: 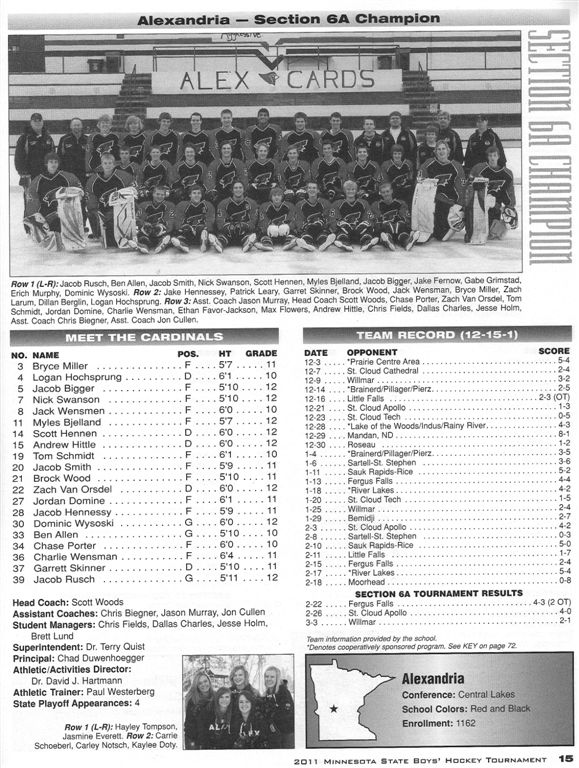 I don’t think we’ll be in class AAAA next year. We spent the night at Cam’s in Mounds View, and the three of us headed to the Xcel Energy Center for the first game of the boys state hockey tournament the following morning. The Cards (the only team in the tournament with a losing record) were playing the 2nd-seeded, Hermantown Hawks, with a 23-3 record. The task seemed daunting, but a review of both teams’ performances against common opponents indicated it could be a competitive game.

The first period was rather equally played as both teams attempted to get their tournament legs under them. It ended 0 – 0, looking not bad for the Cards. The Cards scored 5 seconds into the 2nd period! Nick Swanson won the draw back to Jordan Domine, who obviously just trying to shoot the puck into the zone, hit the far open corner of the net from center ice. Woo-hoo! Then the Cards got a penalty – Hermantown scored immediately when a shot from the point dropped at the open corner of the net where an uncontested Hawk tapped it in.

The Hawks proceeded to score four more goals in the period, with the Cards being penalized two more times, all but one of which were flukey bounces of the puck right to an open player on the far side of the net. 5 – 1 was the final score, as the 3rd period also went scoreless. Hermantown was the better team, and congratulations to them – but our Cards really over-achieved this year just to get to state. So a big congratulations to them!

Sophomore goalie, Ben Allen, had a terrific game for the Cards – the Hawks’ goals all came on uncontested tap-ins on the far side. On their last goal, Ben lost his stick, was handed a stick from one of his defensemen, made a couple more stops, and they finally scored when a shot hit his facemask and somehow looped over his head and into the net. He seems very relaxed in goal, has a quick glove hand, and will be a good player to build around for next year. 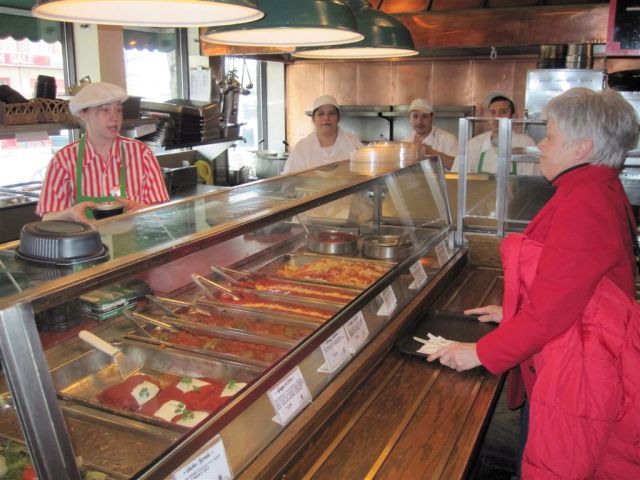 We concluded the day’s festivities at Cossetta’s for a late lunch, dropped Cam off, and headed home. We have a series of non-athletically related venues to attend today before we head out on the road again – the girls’ basketball section finals at St. John’s tomorrow night.

[From the Echo:  Sam scoring over Sartell’s 6’5″ center.  We have reason to believe that the person in her Cardinal red, on the far left side of the photo, is Ruthie!]