There was nothing on the calendar yesterday. Since my blogging affliction borders on addiction, I decided to present . . .

Sister Gretchen has a birthday tomorrow. She lives in Washington, D.C. and works for the Bureau of National Affairs. BNA is a private entity that keeps track of what our government is up to. Last year on her birthday, we were at the girls’ hockey section finals – tomorrow night will be doing the same as our Cards play Fergus Falls in Detroit Lakes. Last year the Super Fans sang Happy Birthday to her at the game. We submit it to her again this year – Happy Birthday, Sis (and photos with her older brother (moi) and all her brothers):

[Our Gretchen, incidentally, is NOT a sports fan.  In fact, at every family holiday gathering throughout our lives, she would always announce, We’re NOT watching games!!] 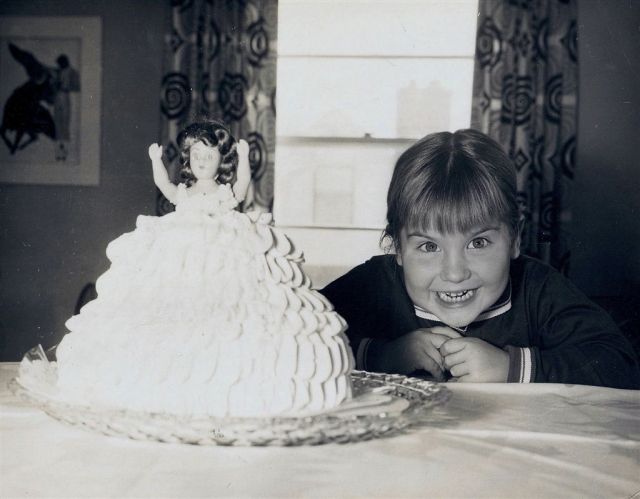 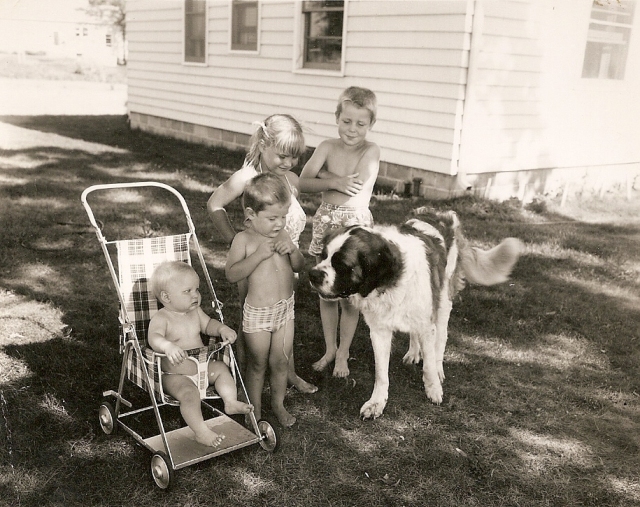 [Gretch went to Corcoran School of Art in D.C.  I know she did a self-portrait.  Couldn’t find it.  This is the best I could do of her art.]

Gretchen Nelson is a lost soul snowbirding in California.  As a subsitute teacher, “Dr.” Nelson has a severe and chronic affection for “her kids.”  She is a fan’s fan – here, in her own words (with some amendments for e-mail shorthand):

Ah, I’ve not heard you refer to me as Dr. Nelson.  I have the equivalent of a Master’s but not the right units together.  I’d love to hear specifically about my boys of the ‘hood’ (read court).  Only one has my card–darn.  I should have thought of that earlier.

We’re walking in shorts and tees and bought fresh flowers at the open-air market up the road from us.  Fresh bread, meat (@ $10.00 a lb.), hummus, olive oils, crafts, etc.  The bread man is a Christian and makes these ‘divine’ (no pun intended) scones.  I gave him my book last year in exchange for bread.  A few Sundays later his pastor gave a sermon on the topic so he gave him the book.  Odd how life goes.  The rest of his breads are simply excellent.

Went swimming yesterday in open-air pool, but I miss my boys.  And I miss being at school.  Thx for all the info.   – Gretchen

I hope you understand that I wrote that in jest:)  My boys play tonite and the girls did a great job last night.  I REALLY miss not being there.  There’s no there here.  Our g’kids are in school, working, or in sports.  Very difficult to get together.  All our own kids and spouses are also working so it gets down to maybe a Sunday.  Super bowl we were all together and had a great time.

Went to former congregation for choir practice last night and they were so welcoming.  We’ve known a bunch of them for 30 yrs.  Some are not doing so well and some already in the dearly departed ranks.  Uff da.  Take care and hi Ruthie.  –  Gretchen

I cannot tolerate NOT being there to watch the BB teams unfold into something so absolutely wonderful!!!!  It’s raining here so Don had to x-nay his golf over in Temecula with the older guys.  We’ve been enjoying $6.00 Tuesday movies, which we walk to from our pad in the sky.  Anyway, take good care of my boys of the hood–during their next game.  I can’t get my computer hooked up here so it’s almost a loss except for the writing.  I’d love to contact some of the teachers but my address book is non-functioning at this point.   Take care.  – Gretchen

What’s so wonderful to love?  🙂  The comment re: my computer is so hack-eyed it’s awful.  Whatever on the blog. Today we’re off to the open-air market in downtown Oceanside–one of my favorite things to do here.  It’s sunny, great walking to the market where we’ll each get a scone from the bakery guy–they’re top notch, walk around admiring seller’s stuff.  A chub of beef goes for $10.00 a pound–we don’t buy it.  Fish, which we thought we’d eat a ton of here, is also high as the fish are playing get away games in the ocean.  Last year we ate calamari till we couldn’t stuff ourselves any more with it.  They were almost jumping into the boats, so price was $8 a pound.  When one can get 4 nice sized steaks in a pound, that’s a given to purchase.

A lady sells some very unique hand carved wood items.  Last year I bought a pedestal salad bowl and got raves.  This year I bought a 3-armed candleholder. So far.  $20 each.  A steal.

Then it’s up to Mission Viejo where we used to live for afternoon bridge and dinner with friends and then off to choir practice at our former congregation.  Big choir.

I REALLY do work up a snit for not being able to be at the games.  The first thought I had upon awaking yesterday was by just how much did the girls win the game.

Maybe we’ll do the KXRA thing on Don’s computer.

Enjoy the weather.  See you in 6 weeks about the time baseball starts–a game I see as lacking purpose and which the kids know I despise.

[Late addendum to Gretchen:  Did you know she grew up next to fellow Super Fan, the Hoymster (featured often in this blog), in Brooten?   Amazing how they both ended up in Alex as huge Cardinal fans.]

Now that you’ve had a report from a snowbird, it’s time for the report to the snowbirds.  Shorts and t-shirt weather here all week!  Records, and snow banks, falling everywhere.  I wouldn’t have believed this much snow could disappear this fast.  The roads are dry and clear.  The snow is off the roofs.  Splotches of grass are everywhere.  Here are some photos I took yesterday, the 16th – the first signs of grass in the yard, the first sign of our pebble driveway, the thermometer reading a balmy 50!  And a true sign the end is nigh – yesterday the high temperature in the state was in Ely!  Ely!  The gateway to the Gunflint Trail and the Boundary Waters Canoe Area.  Ely – 50 miles inside the Arctic Circle – recorded a temperature of 59 degrees, which beat the old record for the date by 20 degrees!  There is still over a month of winter left – Minnesota winter!  Something weird is going to happen.  Anyway, we have girls’ basketball tonight v. DL (then they have to go to Fergus tomorrow night), a road trip to DL tomorrow for the girls’ section hockey finals v. Fergus, and Saturday, we’re going with President and First Lady Donley to see Garrison Keillor in Morris (so we will unfortunately miss two performances by Dan Mahar).  Oh, and “the boys” are out front fishing today with their trucks – probably trying to make up for being skunked during the Fishing Tournament last weekend. 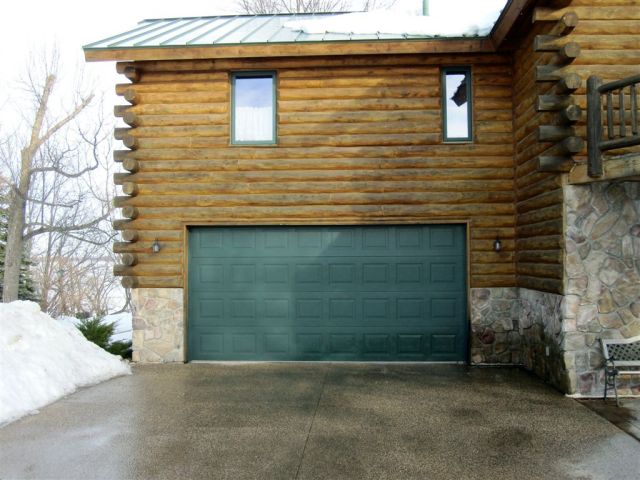 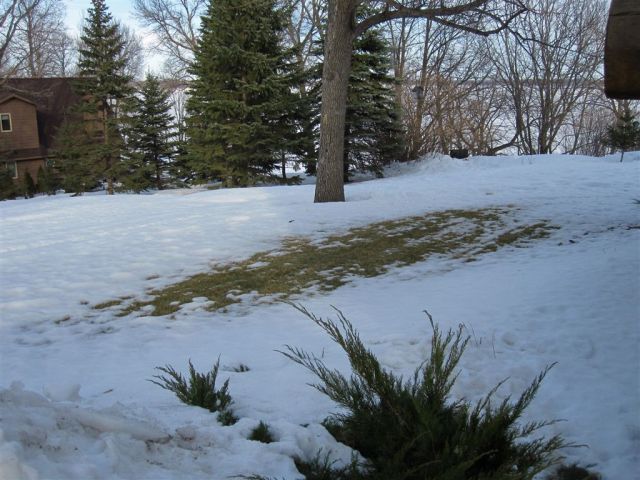 Finally, a short video of Wisconsin-River Falls’ 12-0 victory over Finlandia (the only private university in the UP – I looked it up!), maintaining their perfect season.  I believe Michelle Anez scored goals 10 & 12 (and also had an assist):