But first, Broadway, Alexandria, Minnesota, December 2009, from the Daily Grind (now, unfortunately, having joined the list of closed eateries in our fair city):

And continuing in the genre of archival videos, I have added five videos of the time to “The Background”, January 4, the story of the state hockey championship in this blog.

Further, we would like to express our appreciation to Hizzoner, a/k/a, Your Worship, the mayor of Alexandria, for sending the following photo today. For tomorrow morning the Senior Center is our destination for a Kiwanis pancake feed:

And finally, before we get to the Trumm files, we feel a certain responsibility to those featured herein who attain a certain degree of notoriety as a result of being exposed to a readership that reaches into the 10’s.  So here, for your consideration, is Lady Gaga’s approach to fame:  Basically, if you have nothing—no money, no fame—you can still feel fame—you can still feel beautiful and dirty rich. It’s about making choices, and having references—things you pull from your life that you believe in. It’s about self-discovery and being creative. I like to funnel interesting ideas to the rest of the world through a pop lens.  We trust that helps to fill a void.

And finally, finally, before we get to the Trumm files, THIS all began as means of keeping snowbirds informed of the goings on in their summertime community.  Certain of the snowbirds, by virtue of their roles as substitute teachers, have emotional attachments to the players and the teams.  Nationwide communication links were virtually burning up the night of the girls’ hockey championship game in ’08 – people in Texas were texting websites to people in California, and such.  Now, thank goodness, KXRA has gone global.

We recently heard from Marlene and Richie Braun, snowbirding in Florida, who are delighted to receive the news and sports reports from home.  The following week will be in the uppers 70’s there [Editor: That’s too hot!], and JoAnne and Corky Krogstad will be visiting them next week.  “Dr.” Gretchen Nelson has checked in twice since they recently snowbirded to California.  Gretchen has a fierce emotional attachment to every player on every team she watches.  She has been known to repair to the outer concourses during tense games.  Dave Serie, slugging 3rd baseman on the Cardinals 1965 2nd-ranked in the state baseball team, notes he follows the blog and that his daughter Sarah plays for Champlin Park’s basketball team.  He thought it would be fun to have Alex play Champlin Park sometime.  I checked – Champlin Park high school has over 2,800 students; Alex has about 1,100.  Oy!  Terry Lang, whose family left Alex in 1960 and has since called Bremerton, Washington home: Had to reply to your latest post. I don’t usually get sentimental but I love being called “Master Chief” as that is what I was in the Navy. And, I was stationed in Iceland from ‘64-66 and I could never prove it, but my Icelandic friends would roll on the floor laughing when Steve Allen said  “Schmock, Schmock.” Seems that schmock is Icelandic for condom. Have a great day. It’s suppose to rain again out here.  Crazy Dave Owen and Jim McElwain check in from Florida; Harry Ramaley, Jon Haaven, Loren Berg, and Paul Fieldhammer check in from Arizona.  “Dr.” Kiehne, a full-time Texan, checks in from his UT office in Austin.  And the cub reporter-in-training, in his first year as a snowbird, sends only misguided political commentary from a hideaway somewhere in Sarasota.  If I have forgotten anybody it is because it is my usual tendency to do so.

And now, the Trumm files:

[Joyce and Ken Leslie – the Otto and Luella of their time – occupy the same seats on the right side (as it faces the floor) of the stage for every game.] 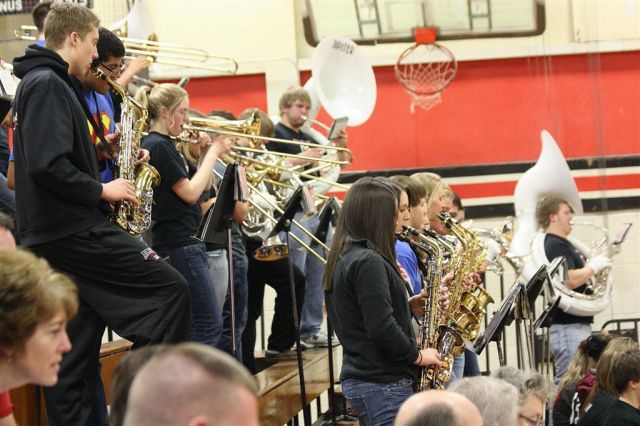 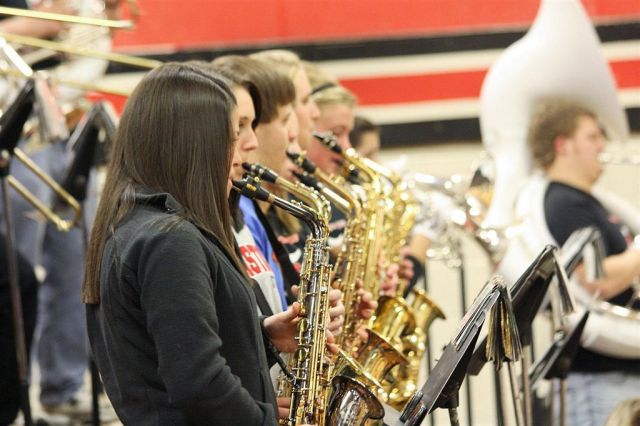 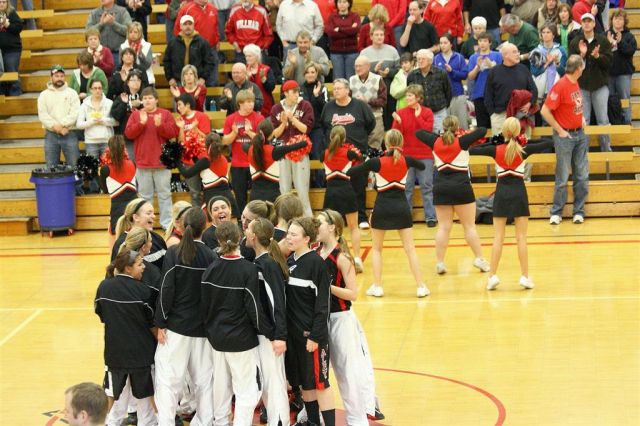 We return to the ever expressive Ms. Haar.  The Mikko Cowdery of the distaff side – someone who promotes a smile merely by their presence.  Alli was player of the game v. Willmar – her first game back from two games missed with an ankle sprain.  During the pre-game warm-ups, she was whipping two-handed overhead passes to a teammate on the other side of the floor.  One pass skipped between her teammate’s legs, bounced two rows into the stands, where her grandpa Martin made a nice catch and promptly returned the ball to play.  During the game, whenever Alli would rip down (appropriate verb) a defensive rebound, she would cradle it in one arm, twirl around, and give any opponent in the vicinity a look that said, “Don’t even think of trying to get this ball away from me!” 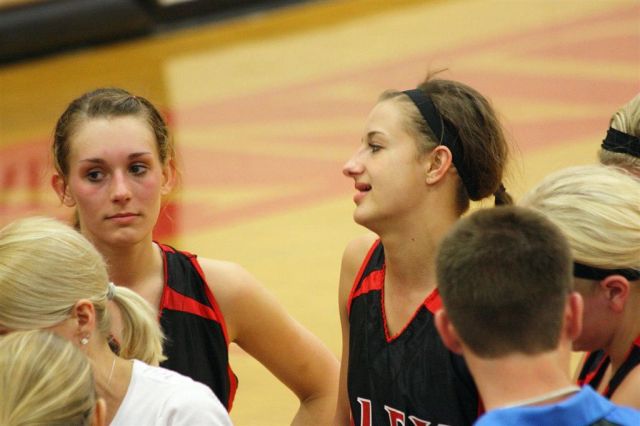 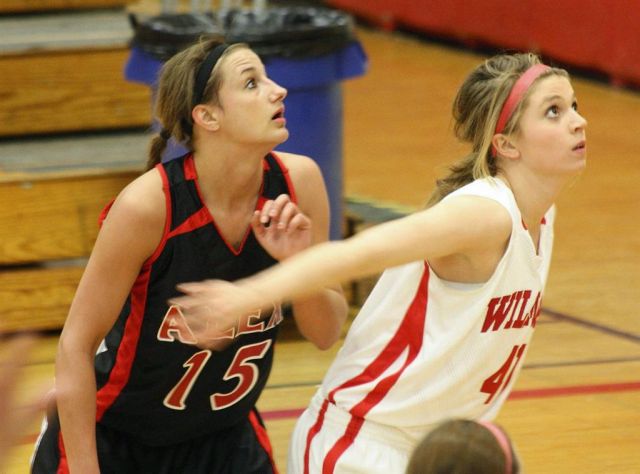 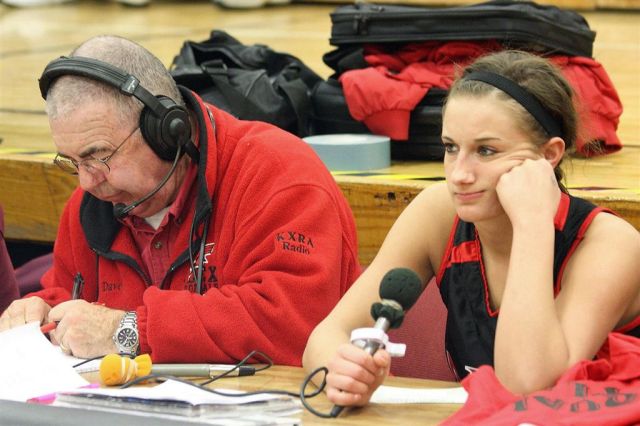 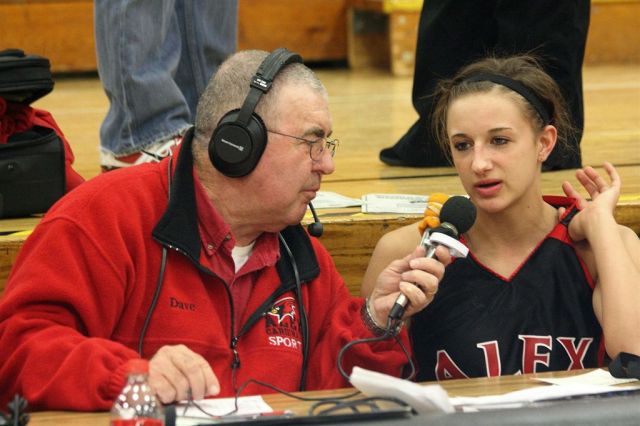 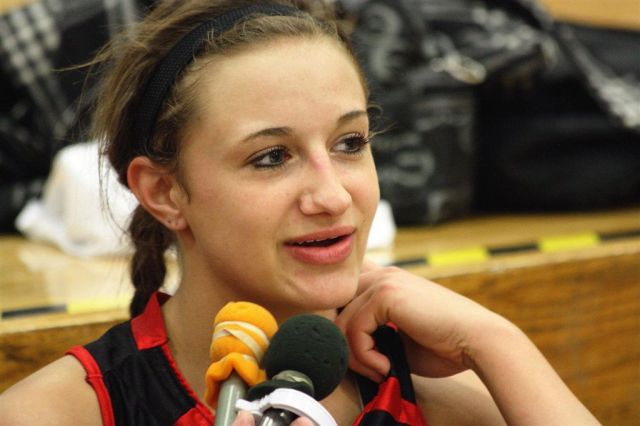 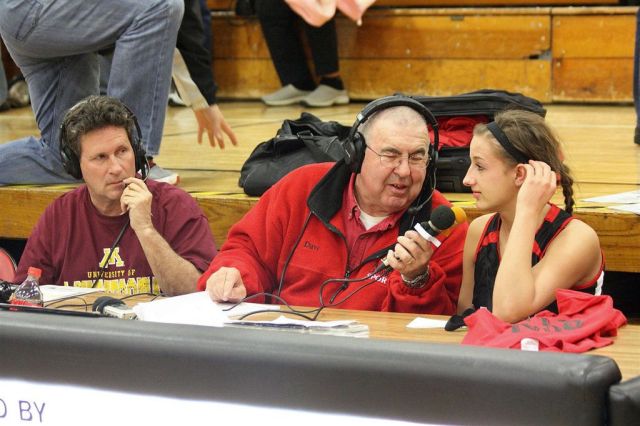 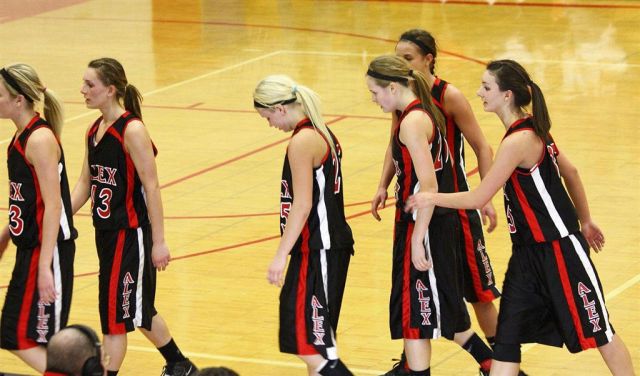 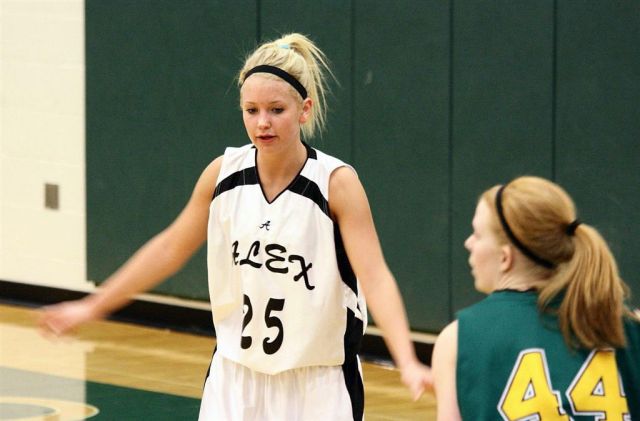 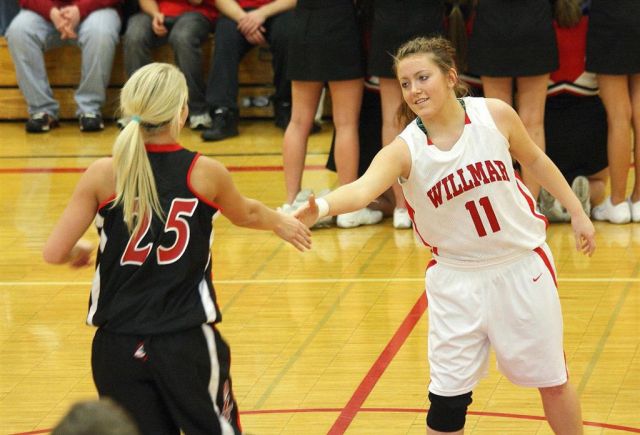 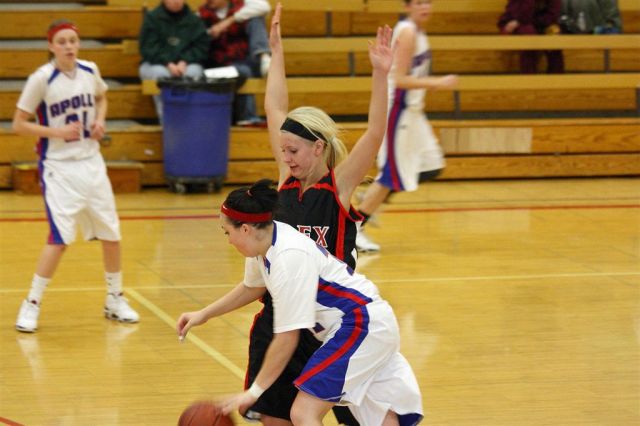 [The last three, Cara tries to prevent the opposition from reaching the safety of the blue garbage can!]

Joie and Sam meet the press: 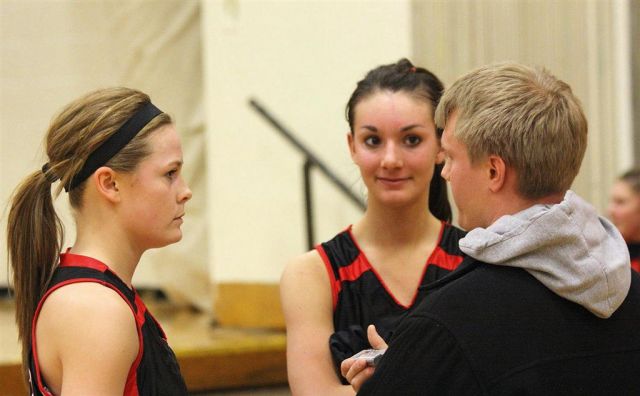 Brianna points out the Super Fans to Sam:

The Super Fans can hardly contain themselves: 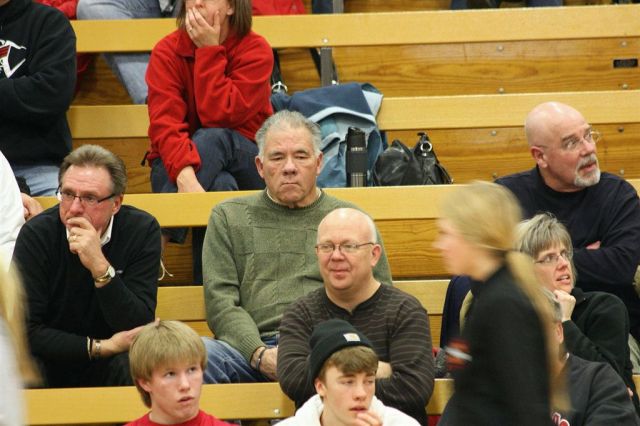 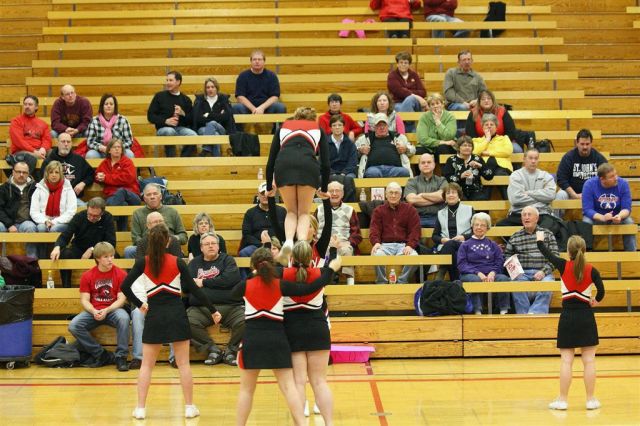 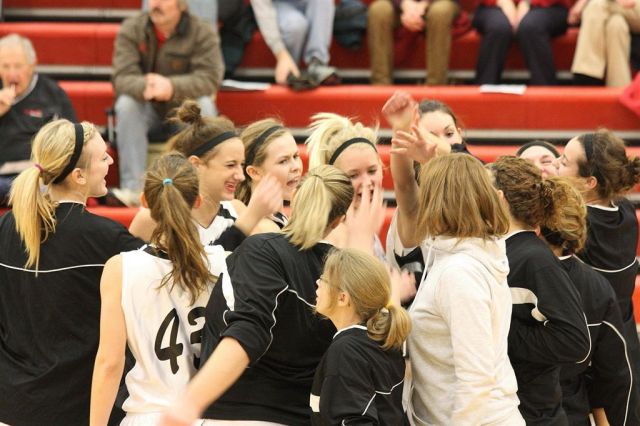 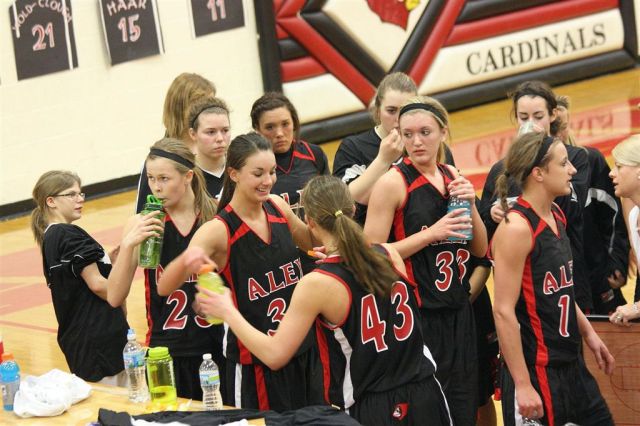 [Regular readers of this blog should think, “Holm, that sounds familiar?”  Yup, her grandpa, El, is the famous pasty maker – and her parents are sitting right in front of the Super Fans 4 photos up.  So, it all ties together eventually.]