Sometimes the Ball Doesn’t Go In 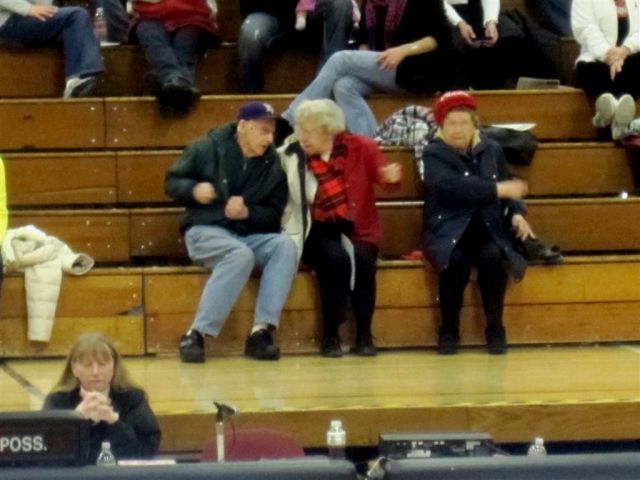 After a fine dining experience on the supervisor’s D. Michael B’s gift certificate, a birthday present from the kids, we arrived early at JHS to catch a good part of the JV game – you know, to check out the future. The JV team had a winning record – but the problem with basketball at that level is that it can be like watching fast pitch softball with a dominant pitcher; a big player makes it a one-person game. Fergus Falls had a 6’2”center, and she was at least 4” taller than anyone for Alex. The Otters just kept lobbing the ball into her, she’d make a lay-up, and they did it over and over again. The game was a rout for the Otters – so we really couldn’t tell much; except when they’re all varsity players we hope the Alex girls have grown to a similar size.

[Varsity, in civvies, there to cheer on the JV]

There was concern in that regard for the varsity game. Although the Cards have good overall size with three 6’1” players, Fergus has a 6’3” center and two other players who are 6’2”. A couple of inches can make a big difference in the girls’ game. But soon after the game began, we could see that size difference wasn’t going to make a difference – except to the extent the Cards may have rushed shots from underneath. The Card “bigs” have an athletic edge on the Otters – quicker, faster, better jumpers. And while that athletic edge did neutralize the Otters good center, to her credit when she did get the ball underneath, she made her shots . . .

That is something the Cards couldn’t do. Despite another great defensive game – that thoroughly impressed the McCoys – poor shooting percentages from the floor and the free throw line doomed the Cards. If you hold a good team to 40 points, your chances for victory are generally pretty good. But the Cards faced another packed in 2-3 zone, with big people on the back row, and were hesitant to shoot from the periphery. Only Alli Haar seemed willing to shoot something other than lay-ups.  [Late entry from the January 19 Echo – the Cards shot less than 20 per cent for the game.  Their defense is so good they almost win despite their shooting.]

Despite the loss, the team created new fans. They are as impressed as I am by the best defensive team I have ever seen – and that makes them extremely entertaining to watch. They will be in the running for post-season success – and we’ll go along for the ride. Next up – at undefeated Sartell (they beat Fergus) on Tuesday. Should be another dynamite game!  [That day is also forecast to be the 1st of three days in a row where the thermometer is not expected to breach ZERO.  I know the snowbirds love to hear that stuff.]

Video of the 1st 5 minutes of the game, with analysis from “Dr.” McCoy:

[In keeping with the melancholy nature of the weekend, we decided to de-Christmasize the house this morning.  Now the place looks like Broadway after the lights are down – a little drab and boring.  For your information, there were 62 ornaments on the 6-foot tree on the lower level.  I’m sure you’ve been lying awake nights wondering about that.]