[Editor’s note: This is a reprise of the two-game tournament in Alex last week – the three e-mails sent out covering the event. Here we feature the other guard, Lauren Trumm (a close relative of the staff photographer), 5’9″ junior (so both guards will be back next year). Lauren was player-of-the-game against Marshall, so she was interviewed both by KXRA and the Echo Press. Her dad captured a particularly good photo of her (No. 43) in the Armstrong game leaping to deflect a perimeter pass. That is what she does.

I must also alert (warn?) you that I will take advantage of this new format to include archival material. Don’t know why I didn’t think of this years ago. (There were warning signs – the Tribune published a list of the 51 things/people most talked about over the past year. I hadn’t heard of half of them!) I can store stuff here in cyberspace and free up my e-mail backlog.]

[December 30, 2010] I decided not to go to the “Y” this morning – the only safe travel mode today may be in a Bradley armored troop carrier. As an older person, I ventured out with great trepidation last night. The game was about an 8:00 starter, and the forecast by then was for freezing drizzle beginning some time before I could safely return to the shores of beautiful Lake Darling. I was also armed with a new camera, about which I knew little (because men don’t read instructions). 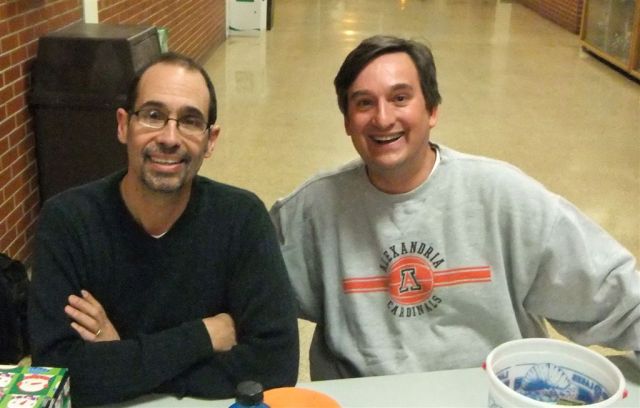 I arrived at JHS to find two basketball dads manning an entry desk. After years of featuring hockey moms (and rightly so!), it is time to reflect a little pub on the dads. So here are Ted Haar, Alli’s (No. 15) dad, and Greg Trumm, Sam (No. 35) and Lauren’s (No. 43) dad. Also captured, Grandpa Martin Haar and Coach Wendy Kohler having a pre-game visit with the Armstrong coach. 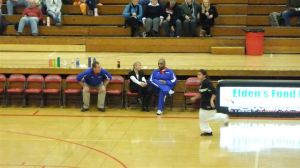 Anyway, I got home with a new camera full of pictures and consulted the directions as to how to download them from the camera to the computer. Nothing – nada – zilch! Unbelievable! Then I accidentally hit something, and the download began. Don’t you feel fortunate? I have no idea what I did so next time will also be an experience of first impression.

But, the game. I videoed (is that a verb?) the beginning again. I wasn’t sure what I was doing or if I was recording. It was – and it shows the Cards (in black) in their entire defensive prowess. Their 1-3-1 zone trap makes it hard for their opponents to complete passes, let alone get good shots. Lauren at the top must run a marathon over the course of game – sprinting back and forth between the two outside guards, constantly leaping in an effort to deflect or steal passes. She does quite well at it. The whole team moves quickly as a unit with the movement of the ball. While the offense struggled throughout the game, the 1st half defense was amazing – Armstrong only scored 10 points, and I seem to recall a third of them were on a banked in three. The Cards maintained a comfortable lead throughout the game – Sam and Lauren led the way with 18 and 17 points, respectively. Wendy cleared the bench for the last 4 minutes of the game – Armstrong, for whatever reason, kept their starters in the whole way and was able to cut the final deficit in half by doing so: Alexandria – 51, Armstrong – 42.

Weather permitting*, the Cards (now 5-0) play Marshall @ 6:30 tonight for the tournament championship. Marshall also plays a full-court press defense, so it should be a challenge. The video:

[* We are under all kinds of advisories and warnings for next couple of days – everything from freezing drizzle, to heavy snow, to wind and cold, to locust swarms . . . (Jim Pohl later said, “Don’t forget the frogs!)]

[December 30, 2010] Due to circumstances beyond my control, it appears that this reporter will be unable to provide on-site coverage of tonight’s championship game between our Cards and the Marshall Tigers. We are suffering from what the locals laughingly refer to as another episode of inclement weather. The Hoymster sent the following “Free Advice”: Never sit in front of a photographer with a new camera when he/she is shooting . . . Gopher Women are on TV tonite at 7:30 pm on BTN.

It started some time before noon. We have been in a virtual whiteout ever since. This is heart attack snow – it’s 34 degrees, so each shovelful of the white stuff weighs about 50 pounds. Ruthie and I have been out to shovel the slab twice since 1:00. The warm temperatures now (though the bottom is scheduled to fall out soon!) have caused avalanches to come down off the roof – we have been shoveling snow that has been up there since early November. At its current pace, it seems quite likely that we will not be escaping Darling Heights Place anytime soon – and such escape will likely require a call to our friendly neighborhood super-duper snow blower man. Not to worry, however. We did get out this morning to acquire necessary larder – the last of the baguettes at Elden’s to go with already stocked cheese and, I believe, a decent supply of fine champagne!

So, please excuse the absence of visual coverage of Sam and Lauren and Alli and Joie and Cara, et al. We will have to make do with what I could scrabble together from other sources. The Trumm files included photos of, appropriately enough, the mounting of the Trumm jerseys on the gymnasium walls (I’m not sure if the ladder meets OSHA standards).

Here’s hoping that the girl’s basketball teams from Robbinsdale, Marshall, and Moorhead are able to make it home safely tonight!

[December 30, 2010] The KXRA listening area is under a WINTER STORM WARNING until Midnight. I94 from Alexandria to Moorhead is CLOSED until further notice. MN-Dot and the MN State Patrol have pulled snowplows from all state highways and interstates in the KXRA listening area and are advising NO TRAVEL until further notice. [- from the KXRA Facebook page about an hour ago]

Meanwhile, back at the report. I fell asleep after dinner tonight – it happens. I awoke at 9:30. That means I slept through the Cardinal radio broadcast as well as the Gopher women’s TV broadcast (they lost anyway). Feeling a tad logy, I stumbled to the windows to check on deck snow depth – looks like another full day with the shovel tomorrow.

I checked the KXRA website and played back the end of the Cards game. We won! And rather handily, 70 – 55, against a Marshall team that was 4 – 1 and had beaten Moorhead handily in the first round. The Card balance and defense were the big keys again – Alli had 12 points (all in the 2nd half), Joie had 15 (announcers said her best game), Cara had 10 (and handled the ball well), Sam had 9 (but was in foul trouble – a point of concern for the announcers – and sat out a good portion of the game), Whitney had 4 off the bench, and Lauren had 20 (and was player of the game) – and the Tigers turned the ball over 33 times under the Cards pressure. The Cards even made 10 – 13 free throws in the 2nd half, showing good improvement in that area. So, they head into the new year at 6 – 0, and next go on the road to Willmar on January 4.

Alumni update: Angela Christianson is the 2nd leading freshman scorer in the Missouri Valley Conference. She is 2nd in the conference in free throw shooting at 90% (currently on a 19 in a row streak) and 28th in the country (if 90% is only good enough for 28th in the country, there are a lot of good shooters around!). 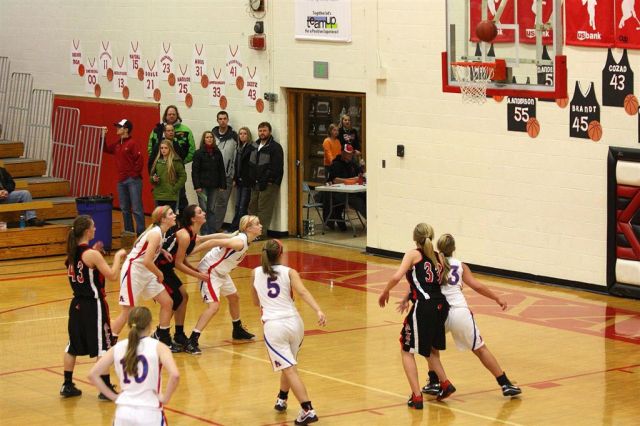 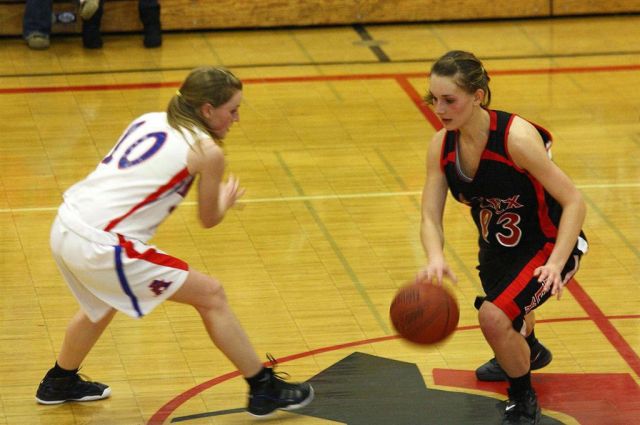